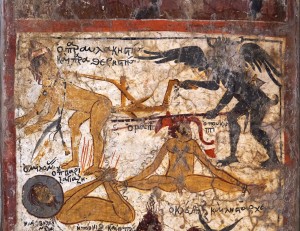 This database is one of the research outcomes of the generously-funded Leverhulme Trust International Networks Project ‘Damned in Hell in the frescoes of Venetian-dominated Crete 13th-17th centuries’, which started in October 2010 and concluded in September 2014. Crete was placed at the core of the project because of its vast and unique collection of surviving churches with wall paintings. In their majority, these churches date from the period when the island was a Venetian dominion (1211-1669), a rule which provided the project’s timeframe; they overlap with the Palaiologan era in Byzantium and the post-Byzantine period after the fall of Constantinople in 1453. The majority of these wall paintings are situated in remote places, which are difficult to access. The photographs included in the current database are the result of painstaking and extensive field work: all the churches were visited, catalogued and the relevant iconography photographed. In many cases the journey to locate a church was disproportionally longer to the time it took to gather the appropriate research material. This database is a valuable building block in researching Venetian Crete and a vital contribution to development of the wider European Renaissance, by presenting a wealth of visual material.

Find your personal contacts including your tutor and student support team:

Help with the University’s computing systems:

Help with accessing the online library, referencing and using libraries near you: